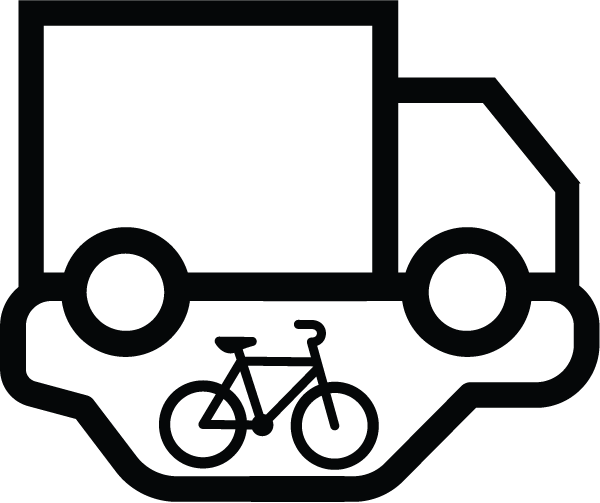 Source: I couldn't think of what image to use for this post, so I made this abomination. Using no image would have been a far better choice, yet here we are.

While it's not an outright lie to say I have a car, it's probably a bit disingenuous. As recently discussed, calling it a two-seater with some generous trunk space is definitely pushing it (but technically correct).

More accurately, I have an eleven-and-a-half foot tall, four-to-five ton, screaming metal death trap on wheels. From that description (and my past ramblings), it's not particularly shocking that I try not to drive it, but there's actually a whole host of reasons I stay away from behind the wheel.

So Many Dead Dinosaurs

1. The thing is an environmental nightmare, a fact I've talked about before. Seriously though, a coral reef dies every time I turn on the ignition. Plus, less driving means I spend less on gas. But even given the utterly dismal ten-mile-per-gallon fuel efficiency, I only ever top the truck off once every three months or so.

Recently, I accidentally killed the battery by sheer force of my own idiocy. After AAA came and jumped it, I had to leave the thing running for a while to make sure the battery was recharged. Watching the monstrous box idle for half an hour was…painful.

2. Not driving it keeps my insurance premiums stupidly low for, you know, basically being my rent. The price has gone up and down over the years for a bunch of different reasons (discounts, speeding tickets, proof of mileage, etc), but for now it's settled at a perfectly palatable $492.88 per six month policy.

3. The less I drive, the more it's worth when I sell it. This isn't a big deal, because with 160,000 miles on it, the additional mileage doesn't really result in much depreciation. I just need to treat it well enough to not cause any major mechanical malfunctions in the mean time.

4. Despite my best attempts to secure stuff, things will move around when I drive. The less I drive, the less reorganizing I have to do. Even with earthquake-proofing straps and stuff, there's no telling what kind of torque I'm putting on random key structural components of the truck, and I'd rather not find out by bending something important and suddenly have it start leaking (again).


So, if I only have one "car", and I do my darnedest to not drive it, how do I get around?

My trusty partner in crime is a fairly modest machine, the same used road bike I haggled into my life nearly two years ago. Reading over that post, it's funny to see just how far we (the bike and I) have come. By my estimates, I've put at least 1,500 miles on it, and likely much more. And if the bike was "hardly used" when I bought it, I'd describe it as "well-worn" nowadays. I've definitely put it through its paces, for everything from the daily trip to work (~1 mile), to the weekend jaunt over to one of my usual cafes (~10 miles), to the excursions up to San Francisco/Sausalito I try to make at least once a month (50+ miles).

The last time I brought it in for a tune-up, the mechanic basically told me to not even bother. He said it'd be marginally more to buy a nice road bike than to fix all the thoroughly worn pieces of my current bike. To really drive home his point, he threw in an overly detailed and itemized list of each repair he recommended to bring my bike to a safe and reasonable condition. The list included pretty much every imaginable bike component except the frame. 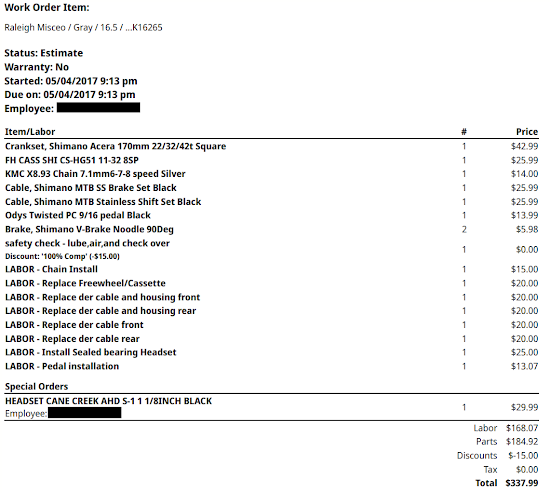 And this was nearly six months ago, it's only downhill from here. Which is terrifying, because the brakes don't work all that well.

With all the above in mind, I'd describe my current plan as "ride it until it literally falls apart from underneath me."

And while I'm fine with that plan, I understand it sounds…not ideal. I swear, it does have a few redeeming qualities though. For one, I've gotten used to how much effort it takes to get my bike moving, and just how few of the gears still work. So as my bike gets harder and harder to ride, it just means I'll be more and more surprised by how awesome my next bike is. Plus, if this bike can still make it to San Francisco, it can't really be that bad, can it?

But alas, there are times when the bike, try as it may, just doesn't cut it. If I need to show up somewhere not looking like a sweaty, truckly mess, the bike isn't a particularly good candidate. Or if I need to haul stuff around, like picking up a package from my mailbox, the bike is, at best…awkward. Historically, I've filled in these gaps with corporate cars*, the truck, and the occasional rental car, but these cases come up surprisingly infrequently.

In my past travels, I've always rented cars from the usual suspects, namely National, Enterprise, and Hertz. It makes sense, they're present at all the major airports and I've always gotten generous corporate discounts booking with them, even for personal trips. And while that's all well and good for air travel, I've always been curious if there are better options when I'm just running a lot of errands or doing a semi-local weekend trip. Clearly, I hadn't been curious enough to actually do anything about it, but this past weekend I finally got around to doing a little bit of experimentation.

One of the benefits of living in the Bay Area is that it's a hotbed for random start-ups testing their services out. That may seem like a bit of a non sequitur, but it just so happens that some of these random start-ups operate in the travel/rental car space, like Getaround and Turo. The service they offer is basically like Uber or Lyft, but for crowd-sourced car rentals. People can list their cars at a daily rental rate, and people can go on and rent them.

I had never used either of those services before, but Halloween-related party planning meant I had to do a bit of running around, and the bike wasn't up to task, so I signed up for Turo. There was a bit of a communication/logistics problem with the first car I tried to book, which was unfortunate, but the second one ended up be cheaper, nicer, and closer to where I was, so overall it was definitely a win. And compared with the more traditional options above (even after all my usual discounts), I got a better car, more conveniently, for a better price, meaning these car-sharing apps are definitely going to become a part of my travel playbook.

All of this has gotten me thinking: could I buy a car, and then just list it on one of these sites to make a few bucks on the side? The past two years have shown I only need a car at infrequent and sporadic intervals, so I could heavily subsidize the cost of owning a car (or even profit), with a minimal amount of legwork involved on my end.

I could even take it a step further, and catalog the going rate for rental cars of different makes, models, and years, and compare that to the current cost of buying one of those cars outright. This would tell me which cars would be the most profitable to list on a given platform. Another (related) idea: since these apps allow you to offer car delivery, I could mount a bike rack on the car, drive it to wherever the renter is, and then bike back, and do the same thing in reverse to pick the car up at the end of their rental.

Obviously, I need to look much harder into the details (associated costs, insurance, risks, logistics, etc), but it's certainly an interesting proposition.

*My company has a fleet of cars we can borrow between like 7 am and 8 pm on weekdays, which are useful for errands and meetings on different campuses.