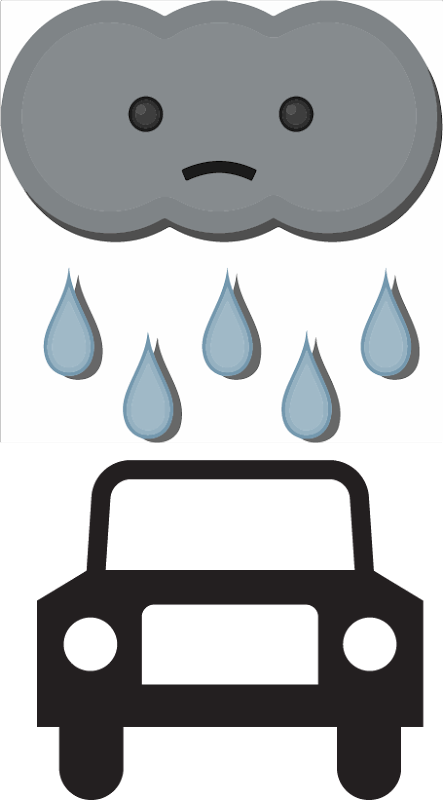 Source: Cloud from WikiClipArt, truck from, you guessed it, Clker

I don't think it rained once when I interned in the Bay in 2014. The summer of 2014, to be specific. Doing a bit of overzealous extrapolation, I came to the incorrect conclusion that it never rains in the Bay, which sounded just splendid to me. Before I moved out here to start a full-time job in 2015, I donated my boots, raincoat, and any umbrellas I had. When I actually got here and bought the truck, I didn't even bother checking for leaks. You can tell where this is going, and anyone from the area knows that I made a grave miscalculation. I found this out the hard way during my first winter here.

If you look at the climate data for the area (which I clearly hadn't), it averages a meager ~0.75 inches of rain over the entirety of May, June, July, August, and September, as my 2014 observations suggested. Much to my chagrin, the weather swiftly turns from Dr. Jekyll to Mr. Hyde around October, dropping more rain than the preceding five months (0.85 inches) combined. It doubles down in November and drops twice as much (1.83 inches). It drops that, plus another half inch in December (2.3 inches), and ups the ante another inch for January and February (3.2 inches each). Which leads me to my inspiration for this post: just prior to writing this, it rained for nearly two straight weeks.

I have a love-hate relationship with rain. On one hand, it's great not living in an arid wasteland, and the Bay needs all the water it can get. On the other hand, the rain definitely makes my life more challenging. Not only does a gentle drizzle on the box truck roof sound like a safe full of silverware tumbling down an infinite escalator, but my truck isn't exactly waterproof either. Basically, the rain and I are in a nuclear arms race, and I'm definitely losing.

A History of Failed Solutions

When I encountered my first real leak, jury-rigging a pipe and a bucket to divert the water was sufficient. But like a sinking ship in an old cartoon, more leaks quickly sprung up, and I needed to be more proactive in my game of fluid fisticuffs. So I fixed part of the problem, and the leaks lessened. But my Band-Aids were no match for a through-and-through downpour, forcing me to resort to strategically-placed trash bags to contain the current. After attempting to track down the leaks, I went back on the offensive and slathered some marine sealant around what I thought were the problem areas. And up to a certain amount of rain, trash bags and a bit of active leak mitigation actually isn't that bad of a solution. But when it rains for two weeks straight, a few problems start to creep up:

The Humid Truck Swamp is more of a nuisance than a real issue, but the whole premise of living in a truck was that I thought I could do it without sacrificing any of my happiness. And there was no sense in trying to spin it, I found this unpleasant.

I've talked about when would be a good time to call it quits, and if I were a slightly more reasonable person, I very well may have decided that this was that time. Maybe the truck isn't actually worth all of this effort. But my skull is a bit thicker than average and deep down, I do legitimately enjoy trying to tackle these kinds of problems. So instead of selling the truck and being normal for a change, I did what any serial sadist would do, and just moved to a more elaborate crutch, pictured here: 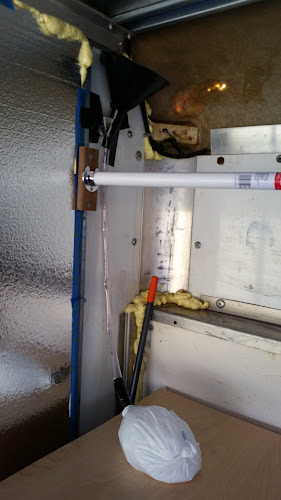 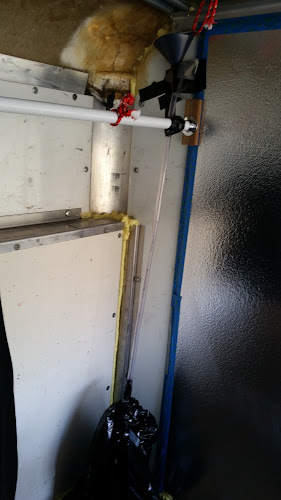 Opposing top front corners of the box, looking like a scene from a Breaking Bad knockoff. The Shrek-snot insulation also makes a cameo.

I know, it's looking pretty grim in there. Like, next-level truck dungeon grim. In case it's not obvious what's going on: instead of letting the leaks drip directly into a trash bag, now they drip into an extremely jankily-placed funnel, secured by several feet of extra strong duct tape. The funnel is inserted into a few feet of plastic hosing, which, in turn, is fastened to trash bags of varying sizes by an ever-increasing amount of duct tape. This solves the humidity problem because the surface area for the water to evaporate from is now far, far smaller. I set this up a few weeks ago, and it's actually worked surprisingly well.

It's painfully obvious at this point that I'm reaching the limits of my mechanical capabilities in this fight. I can't keep relying on ever-more complicated crutches. Further, I have to be careful to not let myself normalize these terrible hacks, lest I end up with an unacceptably low or even hazardous standard of living. This was my line in the sand: It was time to actually fix the underlying problem. Accordingly, I brought the truck into a body shop to get a quote, and I'm hoping to have the box repaired in the next week or so, ending the arms race and allowing me to focus on actual truck improvements.

I'm not sure if there are any good lessons to be learned here. Seven months out of the year, this isn't even a problem, and I'm rapidly on the way to rectifying those other five months. Looking back on it all, I'm actually glad it rains here sometimes. Aside from the obvious environmental problems of not having any rain, it forced me to think outside the box, hone my duct tape-fu, and in the end, make some real, permanent improvements to my home. Plus, how could I appreciate the sunshine without a bit of rain?