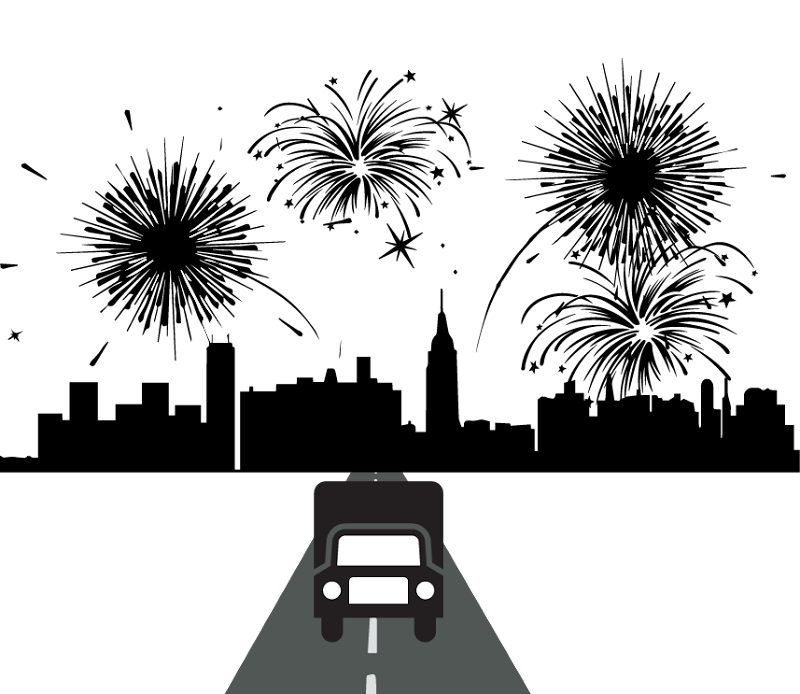 Source: As always, truck from Clker, City from 123RF, more fireworks from Clipart Kid, and road from Clipart Panda. Composition haphazardly done by me.

Excuse the contrarianism for a second here, but I'm not a fan of New Year's Resolutions. Don't get me wrong, I love seeing people take the initiative, work hard, and reach their goals. My qualm is that, if you want to change something about your life, just do it. Don't wait until we reach an arbitrary point in our orbit around the Sun to better yourself. After all, January 1st is a day just like any other, nothing makes it any more conducive to success.

Complaining aside, that's not to say I don't have plans for myself in the New Year, I definitely do. They're just the same plans I've been working with and tweaking for the past year and a half. If someone in a hypothetical and unnecessarily violent world put a gun to my head and asked me to sum up, in a single word, what my plans are, I'd probably say: "Investing".

"Investing in what?" you may ask. I've already talked about how I've been investing in index funds like VTI and VXUS through my 401k, Roth IRA, HSA, and brokerage accounts, and nothing has changed there. That's all still on auto-pilot, silently siphoned out of my paycheck and quietly compounding interest. And it's still working really well for me, and has already netted me >$10,000 in dividends and appreciation.*

My investments through Vanguard, a year and a half in.

But with my student loans paid off and a freshly-minted promotion, I should start looking to diversify my assets outside of stocks, especially as I start to build up a more sizable nest egg . So we'll start with some more of the financial investing I'm considering, but that's far from the only way one can invest.

Okay, so the stock situation is solid and doesn't need any intervention, at least until I near retirement and start investing more heavily in bonds, per Bob's advice. But still, it wouldn't be particularly savvy to keep >95% of my wealth tied to the performance of two funds, regardless of how diversified each may be. So, I've been looking at my options, and there are a few promising avenues. for consideration

Brandon, how the hell are you going to invest in real estate when you live in a truck?

It's true, one of the reasons I live in a truck is because housing is ridiculously expensive out here, and buying a home (or rental property) would require me making deals with some unsavory, otherworldly creatures. That said, I can invest in REITs. REITs, or Real Estate Investment Trusts, are traded like stocks, but are primarily invested in real estate and mortgages and other things that track the value of the real estate market. So I might not being able to buy a home, but REITs are a less messy way for a beginner to get into the real estate market. At the very least, I need to do more research on their risks, returns, and tax properties before I actually put my money where a house is.

Peer-to-Peer Lending is another type of investing where, you guessed it, money is lent between peers. Sites like PeerStreet and Patch of Land allow you to choose from a catalog of (usually real estate-related) loans to invest in, and as the loan gets paid off, you get a proportional chunk of the interest. You can vary the "quality" (read: riskiness) of the loans you're willing to fund in exchange for potentially higher returns and correspondingly higher default rates. These sites quote yearly returns of 6-12% on your investment, which is definitely enough to warrant a more thorough look.

It sounds good for sure, but there are naturally a few things worth considering. For one, loans are far less liquid than stocks are, it's not as easy to sell your stake in a loan. You can sell your share on a secondary loan market, but that's not nearly as simple as selling a stock. The other wrench in the mix: depending on the peer-to-peer site, most loans are only available to accredited investors, which requires (among other things) having a net worth of one million dollars. As nice as that would be, I'm clearly not there yet. As with REITs above, I need to do more research to determine the viability of investing with these sites.

It's no secret that I plan on dumping the truck at some point. Hopefully not anytime soon though; it's not particularly well-suited for being sold in it's current state. If you think about it, there're two groups of people that'd be interested in it: people who need moving trucks, and people who want to live in vans. The problem is that it'd be weird to use as a moving truck, because it has weird amenities, like a coat rack, insulation, a bike rack, and a sky light. And unless you have a routine very similar to mine, the truck doesn't really provide enough utility to make it a full-time residence. So the market for people who would buy my truck as is…well, it's likely just me. And I think it goes without saying I'm not in the market at the moment. I'll save the details for their own post, but I have a bunch of plans for making the truck more palatable for all of those lurking potential stealth campers out there.

Investing in yourself is arguably the most important investment you can make. After all, you only have one fleshy meat body and sponge brain to pilot around your consciousness. We're all pretty much stuck with the results of whatever investments we make in ourselves.

With that in mind, I'd like to read a bunch of books that I've started but have yet to finish, mainly because I have the attention span of a guppy.** I'd also like to finish a bunch of half-written blog posts that have been collecting virtual dust on my server, along with a fancy-shmancy unfinished site-redesign.

On the fleshy-meat-side-of-things, I've been tweaking my workout routine, and I'd really like to break 1,000 combined pounds on my bench, squat, and deadlift, ideally without becoming potato-shaped. On the cardiovascular-side of things, a friend of mine recently mentioned doing the AIDS/LifeCycle 7-day bike ride from San Francisco to Los Angeles, which sounds like great motivation for whipping my cardio into shape.

Why Investing is the Cat's Pajamas

The nice thing about investing is that the results generally compound on themselves. It's pretty easy to see this with monetary investments, where compound interest and re-invested dividends are real, tangible values. But it rings just as true with investments in yourself as well, just in less-visible ways. For example, regular exercise keeps your resting heart rate low, which means your heart doesn't have to work nearly as hard for the rest of your life. This has great perks, like decreased risk for cardiovascular disease. And if Not Dying™ isn't a good enough reason to invest in something, I don't know what is.

*Naturally, the gains and losses are wholly irrelevant until I start taking distributions and realizing it as income, which likely won't happen for another ten years. Still, it's fun to look at it every so often, even with no intention of doing anything with it.

**For the curious, the books are: The Martian, The Hitchhiker's Guide series, Walden, The Achievement Factory, The Millionaire Next Door, and Search Inside Yourself.