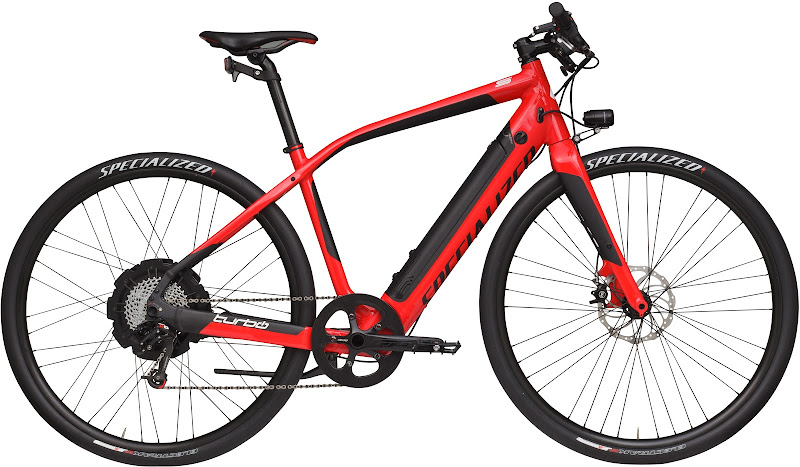 I like to think I'm pretty environmentally friendly. I try to minimize my waste, take quick showers, and not run unnecessary appliances, like heating and cooling systems. I'm definitely not a super earthy-crunchy-Hippie-type, but I'm at least vaguely cognizant of the atrocities I commit against Mother Nature. My main sin against the planet, aside from just being American, is the fact that I run errands in an 11,500 pound tank that gets 8 MPG on a good day. That's bad for at least four different reasons, in no particular order:

So, you can imagine my elation when I found out that my company was piloting an electric bicycle program. Looking at the list of Bad ThingsTM above, here's how an electric bike would make my life better:

So naturally, I signed up for the program, did the training, and picked up my shiny new toy. The bike is a Specialized Turbo. It's a pedalec, which means that it only helps me move along, it doesn't do all the work like a motorcycle would. It has a torque-sensor, so it puts in effort proportional to my own. This is all great, because frankly my cardio sucks, and I can't be bothered to actively work on it. But when you incorporate it into my daily routine, and also let me do it at almost 30 MPH (I got a motorcycle license just so I could get the faster version), I'm much more inclined to play along. I've only had it for four days, but I've already racked up 50 miles on it. I bought a bike rack for the truck so I can take it places with me, but I haven't installed that yet. I'll save that for a separate "Home Improvement" post.

I'm still working out little details, like where I want to mount the rack in the truck (not that there are a ton of choices), and how to get it in and out of the truck smoothly (it's 50 pounds and awkward to maneuver), but overall it's been a total boon to my routine.