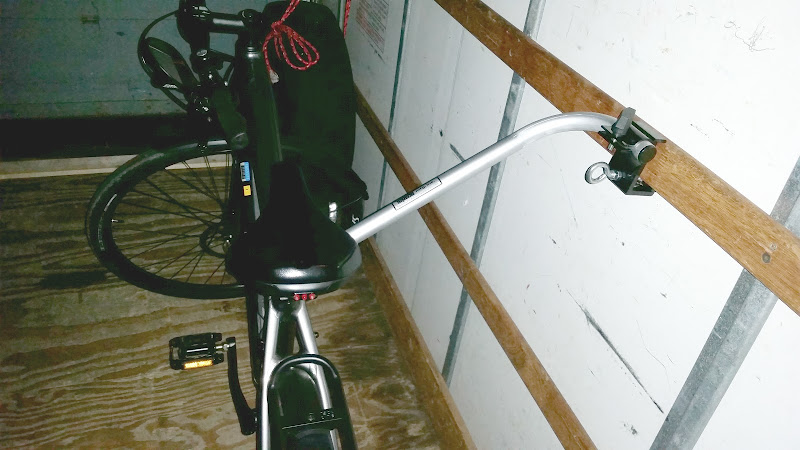 Source: The new rack. Ignore how dungeon-esque this picture looks, I swear it's not nearly this creepy in person.

It's been a while since my last Home Improvement post, which is bad because it means I'm not improving the truck. And trust me, the truck certainly does have areas for improvement. Anyway, I mentioned that I got a new bike recently. This was great but, like every time I get something new, it posed an issue.

I'm now in possession of a large, 50 pound hunk of metal and rubber, which I have to store somewhere. It makes sense to keep it with me, because:

So I made the pretty easy decision to keep the bike safe and sound in the truck when I'm using it. That's all well and good and whatnot, but what happens when I need to drive somewhere? The bike won't stay standing on its own, especially not with my abrupt and punctuated driving style. I'm not just going to lay it down, tie some rope around it, and hope for the best. It has all sorts of fancy parts (derailleur, electric motor, torque sensor, lights, disc brakes, etc), and leaving it to rattle around in the back sounds like a great way to totally and needlessly ruin it. My general strategy for having nice things is to not break them, and I'm going to try my darnedest to keep it up.

So I did some preliminary research. I'm in the unique position of having to choose between a home bike rack and a car bike rack. In either case, I knew I needed something pretty heavy duty to accommodate the weight of this bike in all of its electric, motored glory. I quickly realized a home rack wouldn't work out well, because those racks aren't expecting a ton of movement, so they don't bother with any shock-resistance, which could potentially warp the frame of the bike or toss it off the rack if I went over a bump hard enough. After a bit of searching, I decided on a Truck Bed Bike Rack. I figured that the box is basically a giant truck bed, and I could probably finagle the clamps on properly…somehow. Plus, the bike being upright but on the ground means that I don't have to worry about it falling, like I would for a ceiling mount or some other fancy wall mount. I placed my order, waited a few days for it to come in, then it was time to get my hands dirty, proverbially speaking.*

Now if you've looked at my past "Home Improvement" posts, there's a pretty consistent theme: I inevitably get something horribly wrong and make my life unnecessarily difficult due to my thorough lack of understanding about how the physical world works. I'm a software engineer: I move electrons and pixels, not wood and metal. Per usual, my problem was that I didn't properly do my research. I was hoping I'd be able to clamp the wooden slats along the sides of the truck in the same way they'd clamp onto the edge of a truck bed. Well, I should have done less hoping, and more measuring, because the wooden slats were ever-so slightly too tall to properly clamp onto, and ever-so slightly too close to the truck wall for the thickness of the clamp.

Discouraged, but far from ready to admit defeat, I paced around the back of the truck, at the time parked in a random parking lot. After a short eternity, I realized I could unscrew the wooden slat, place the back half of the clamp against the wall, and then pin it into place by screwing the slat back in. The clamp still didn't fit around the wood correctly, but I figured if I tightened it really, really, really well, I could dig the metal clamp straight into the wood, and hopefully that would be stable enough to keep the bike in place. I executed my new plan, gave a couple tugs on the connecting rod as a test (which elicited a cacophony of creaks), and then put the bike into place, wrapping the clamp around the seatpost.

The end result? So far, good. I drove about a mile with the bike secured in the back and it appeared to survive unscathed, no implosions or loss of life. I'm not yet confident enough to claim that a particularly sharp turn won't just rip the wood slat out of the wall and send the bike crashing to the ground, but I've got my fingers crossed.

*The truck is actually pretty clean, I sweep it at least once a week.