Picking Things Up (and Putting Them Down) 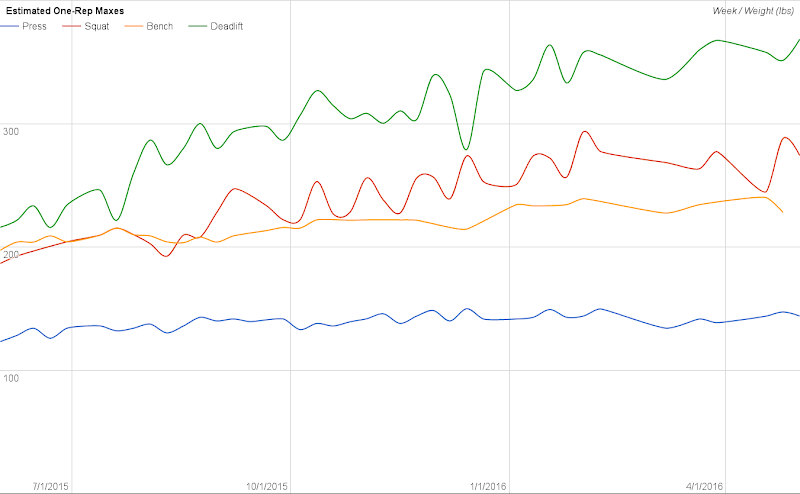 Source: A graph of my estimated one-rep max for each week over the past 10 months.

It's been a while since my last post, and a lot has happened since then. I've hit my one-year truckiversary, surpassed $15,000 in monopoly money savings, and paid off the remainder of my student loans. Expect posts for these things in the coming weeks. As for my absence: I've been dedicating the majority of my free time to building an app for a small nonprofit to help Syrian refugees apply for scholarships. I like to think it's a worthy enough cause to excuse my tardiness and general inability to produce new blog content. Oh, and my laptop unceremoniously died on me. With that out of the way, onwards to the (lean) meat of the post.

I don't know at what point in history we thought it would be cool to start picking up heavy objects for fun. I'd imagine it'd have been pretty recently, it's not like you could stroll into a Chipotle 2,000 years ago after a sweaty, Beyoncé-fueled workout* and replenish all those burnt calories with a double chicken and guac burrito bowl. We live in a brave new world.

Regardless of when lifting and exercise for the sake of exercise became a thing, we're fortunate enough to enjoy the privilege today. I frequently allude to how I take part in the fun: via a modified version of Jim Wendler's 5/3/1 program. That seems like a good starting point for this post, so let's do that.

The 5/3/1 is a pretty standard strength-training routine, recommended to me by my good friend (and source of inspiration) Pat K., who wasn't too far off from setting a state record at a recent powerlifting tournament. I'll be channeling his knowledge and advice for pretty much the entirety of this post.

Anyway, the most important thing to know about the 5/3/1 is the concept of a training max (henceforth referred to as TM), which is a baseline amount of weight you'll use for each exercise. To calculate your TM for an exercise, take 90% of your one-rep max. If you don't know what your one-rep max is, use the formula:

As an example, if I bench-pressed 195 pounds for 7 repetitions, my estimated one-rep max would be:

and my TM would be:

To start a 5/3/1 routine, you calculate your TM for overhead press, parallel squat, bench press, and deadlift, and then the workout is as follows:

A plus sign (+) after a number means "at least this many reps, but ideally you should continue the set until you reach fatigue". In turn, "fatigue" means "the point where your body has failed you and you're a sopping pile of ATP-depleted, lactic acid-filled muscle tissue on the gym floor." Week 4 is called a deload week, and is for recovery, basically a vacation for your muscles. I skip this most cycles, I've only actually ever felt the need to deload once or twice after particularly heavy weeks.

The Warm ups mentioned above are three sets you should do before each day's routine. Those sets are 40% x 5, 50% x 5, and 60% x 3 respectively, and help your muscles get ready for handling the heavier weight you're about to subject them to. They're super important unless you enjoy being irreparably injured.

The table above constitutes the core lifts of the 5/3/1 workout. The other main component of a 5/3/1 is the assistance work, which consists of all the supplementary exercises you do after you've done the core work, to add more exercise volume and build complementary muscles. My whole routine (leaving off the warm-up sets for brevity) looks something like:

Start each squat day with the following:

End each squat day with the following:

End bench days on Week 1 and Week 2 with the following:

Start and end your workout with the following warm ups:

And the rest of the day's routine is:

Since the beginning of this vehicular voyage, I've always considered it a benefit how I'm forced to be consistent in my routine. But up until recently, I didn't really have anything tangible to show for it. I mentioned I was going for a combined lift (bench, squat, deadlift) of 850 pounds, and a few weeks ago, I decided I was ready to put the rubber to the proverbial road and go for it. So I took a week off from my normal routine and replaced each day with an attempt to see how much weight I could safely lift with proper form. For that week, I ate more, slept more, stretched more, and generally did things that would put me in tip-top lifting shape. In the end, I managed the following:

...for a total of 885 pounds, pleasantly past my target. It's a shame though, because much like our base 10 number system makes $10,000 appealing, it also makes 300 pounds appealing, which I was just shy of with my squat weight. Though at 5' 10" and 170 pounds, I'm happy with those numbers. Happy is different than content though, and naturally, my next goal is 900, then maybe eventually 1,000 pounds. The graph at the top is promising too, with its general upward trajectory (the fluctuations are likely because of the structure of the cycles, diet, and my sometimes non-optimal sleep schedule.)

But Brandon, getting out of bed early in the morning and picking things up sounds awful, why would you do that to yourself?

Even if we ignore the benefits of morning exercise, the positive effects of exercise on the brain, and the link between exercise and happiness, there are still a couple of functional reasons. Firstly, there's just less going on at 5:30 in the morning, meaning that I'm way less likely to scare the ever-loving Hell out of some poor passerby when I throw open the back gate and crawl out of my tomb in the twilight. Even though I've learned to not care about people seeing me go about my truckly affairs, I'd prefer to not cause any heart-attacks.

Another big thing is that to me, progress is happiness. I plan on dedicating a whole post to it in the future, so in brief: I'm at my happiest when I'm improving at something, and with exercise it's easy to see and quantify that you're legitimately changing for the better.

The last reason I do it is simple: where else would I shower? I, like most people, prefer to go into work not looking like I just rolled out of the back of a truck. The gym has showers, and that's where I get my daily dose of post-workout de-truckification.

You could totally skip the workout and just use the shower though, duh.

I mean technically, yeah, but it just doesn't work like that on a personal level. I can't just traipse past a room full of equipment and motivated, fit human beings on my way to the showers. No, that right there is more than enough guilt and motivation (mostly guilt) to make that 2 hour pit stop in the weight room.

*Seriously though, Lemonade is a jam.