The Art of Not Buying Things 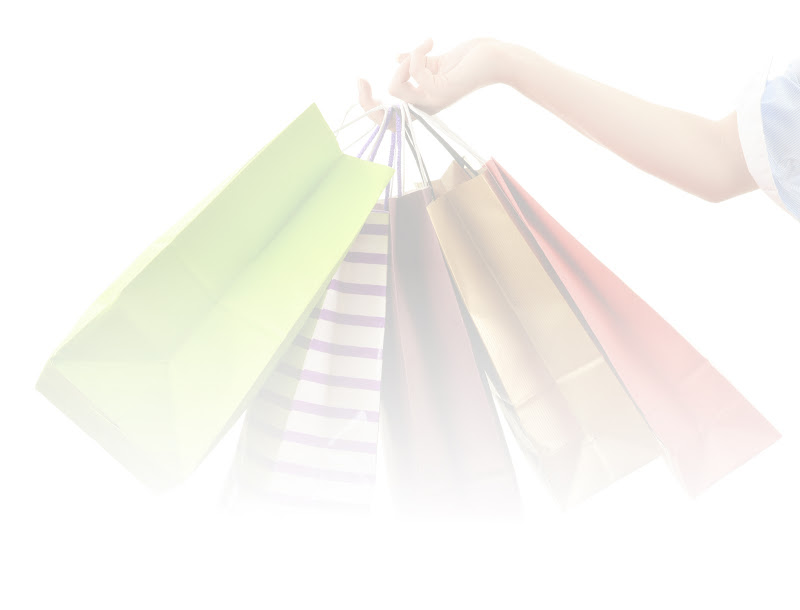 Source: Thomas Carroll, though the fade was added by me. It's supposed to be a metaphor for the desire to shop/acquire an unnecessary gamut of nonsense dwindling away, or something like that.

It's been a while since I last lambasted any of the ideals that keep the American Economic Engine™ chuggin' along. I'm talkin' about things like "Exceptionalism", "Overconsumption", "Materialism", and any other ‑isms and ‑umptions you want to throw into the mix. Given my relative reticence on the topic, I thought it was high time I took some pot shots at Uncle Sam. Subsequently, I've spent a long time staring at this blank expanse of screen, musing over what edgy and Forced Witticisms™ I can put here. Strangely enough, nothing I put down feels particularly pleasing, probably because I don't think I have anything useful to say on the matter.

Making fun of how we do things in America just feels like low hanging fruit, or more fittingly, a cakewalk. It's a lumbering, slow moving target, weighed down by one too many Big Macs.* Plus, Wall-E already did it way better than I could anyway. So instead, I'm hoping it'll be slightly more productive to shift the focus and talk about how I personally make my purchasing decisions. Summing it all up in a flow chart that came out more complicated and less aesthetically-pleasing than I was hoping for:

Should I Buy that ShinyNewThing™? 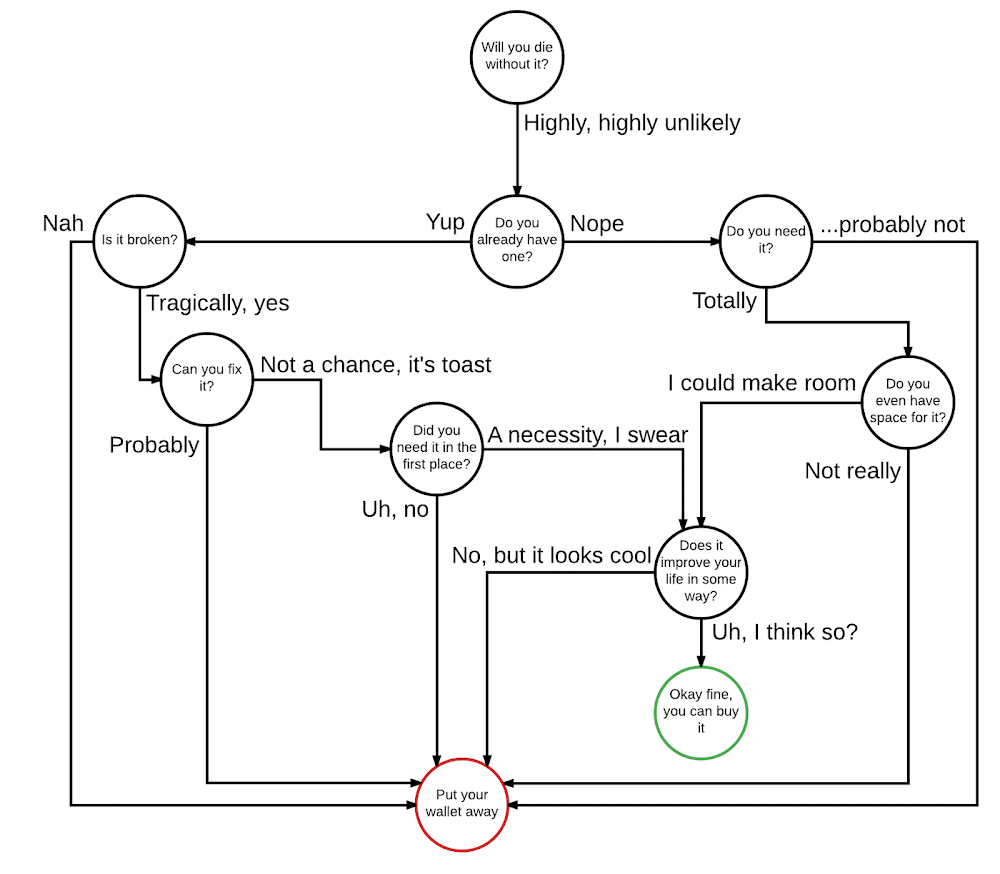 If the chart is too small, you can find a bigger version here.

Before we get started, let me just say that this grossly idealistic decision-making process only really applies to buying stuff: physical objects that I plan on keeping around. It doesn't make sense for the necessities like food or toiletries, or experiences like trips and concerts. I'll maybe touch on that at the end.

The starting point of my flow chart is:

Will you literally die if you don't make this purchase?

And the answer is No.

I put this at the tippity-top because it's important to go into a potential purchase with a properly prepped and calibrated cash compass. The fact of the matter? Life will go on even if you don't buy yourself that ShinyNewThing. If you're reading this, there's a healthy chance you live in a wealthy, developed nation and are not in any real risk of starving to death, or dying of a untreated illness. Whatever the object of your affections, however ravenously you find yourself drooling and hankering, your heart will not actually stop beating if you don't acquire it. The Earth will keep spinning. The sun will continue to turn hydrogen into heavier elements. And we'll all still be inhabiting a mote of dust, suspended in a sunbeam.

Okay, so you've got your heart set on acquiring ShinyNewThing. It glistens like a diamond and you get butterflies any time some of its calculatingly-crafted marketing material flutters past your eyes. It promises to be revolutionary, and improve your life in ways that you can't even begin to understand until you've got your hands wrapped around…whatever it is. But have you taken a good, hard look at what you've already got?

Personal Example: The Samsung Galaxy S7 is out. Compared to my current phone, the S7 has a higher-resolution screen, better cameras, a bigger battery, a faster processor with more cores, twice as much RAM, improved water-resistance, and supports quick charging. Not only will I be able to Snapchat at the speed of light, but this phone will improve my libido and cure most forms of cancer too. And to think, I could buy one with a single week of rent-savings. It seems like a no-brainer, so why haven't I tossed my dusty, worn down, three-year old phone out the (hopefully proverbial) window?

Because it still works.

Not only does it work, but it isn't any less functional just because a newer, better phone came out. It's not like Samsung released the S7 and suddenly every other phone developed crushing feelings of inadequacy and stopped working. If something I own already does the job for me, why would I be in the market for another one? I'm no worse off just because something newer and shinier exists. If I wasn't struggling to make do without it, why get it? Why be an active agitator in a growing E-Waste problem? Why not allocate that money to some other more productive or actually useful area of my life?

But Brandon, what if the thing I already have is broken?

Well in that case, you've just found a great opportunity to learn something new. Do a bit of research and see if it's something you can fix yourself. The Internet is a pretty incredible resource as far as DIY/fix-it projects are concerned. Smartphone took a tumble? There's a decent chance you can fix your phone or laptop screen. Eyeing that new Keurig? See if you can unclog your old coffee maker. A new jacket tickling your fancy? You can probably fix the zipper on the one you just got. Personally, most of what I know about the innards of computers came from replacing dead hard drives and screens and upgrading RAM on my friends' old discarded computers and then using them for my own nefarious purposes. Why not breathe some new life into your possessions and gain a new skill while you're at it?

Brandon, you don't understand. The thing I already have is really, really, irreparably broken.

Perfect, now you have a chance to see if you can live without it. Sometimes you can't, and the answer will unequivocally be "No, I can't live without this because of my job/family/lifestyle/pet tarantula/whatever", and that's fine. But other times, maybe you'll realize that you're actually better off not replacing whatever broke. Maybe your life is simpler without it, or you have more free time because you're not so glued to it, or you just never really needed it in the first place.

A prime example from my life is a pocket projector I had for a few months, which I bought so my friends and I could watch movies in the truck (which we totally did). And that was all fine and dandy, but at the end of the day it was still just another device for me to charge and store and generally have to deal with. It didn't exactly break on me, so this isn't really the best example, but I ended up selling it and felt generally better off for having done it. 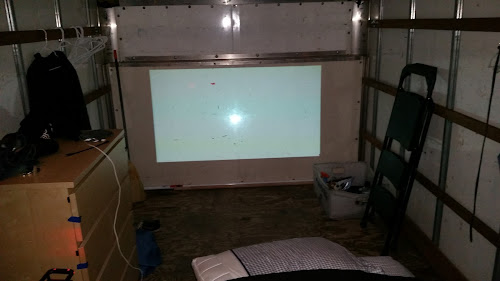 Setting up the projector for Truck or Treat™, where I had some friends over to watch Hocus Pocus on Halloween.

Step 3: Just Think About It

Too often we just jump into purchasing things without ever stopping to question what it means to us. We set our sights on some object of our desires, and buy it as soon as we can afford to. That's not hard-coded into our DNA though. It's not like we evolved the desire to buy stuff. We did, however, evolve mushy meat brains vulnerable to being manipulated in lucrative ways by carefully crafted marketing campaigns.** But if we take a step back and look at the decimals and dollars of it all, we can make a more informed decision about how important a purchase is to us.

Where does most of my money come from? Well, since I'm not (yet) retired, it comes from me spending a double-digit number of semi-waking hours each week doing assorted tasks for other people, being just proficient enough that they compensate me for it. I exchange my time for money via my job. Time goes in, money comes out. Simple. Since most of my money comes from my time-commitment to work, it makes sense (at least in my head) to view money as just a loose abstraction over my time, right? Everything I buy takes some non-zero amount of time for me to earn. Thinking about it this way, why would I want to throw my time away for things that aren't worth it? Why would I want to trade weeks or even months of my time for that ShinyNewThing? When will my rant/bombardment of rhetorical questions end?

To clarify: I enjoy my job. I genuinely do. That said, if money was taken out of the equation, it's unlikely I'd continue working the exact same number of hours I do now. If I had unlimited dollar dollar bills y'all, I'd definitely make a few changes in my day to day life, but I'll save those for another post. If you have other plans for your days besides working, why not use the money to make that a reality? As early retirement extraordinaire Mr. Money Mustache will gladly tell you: if you spend a dollar, it's gone forever. But if you invest a dollar, it's now working 24/7 to make you more money, usually through dividends or capital appreciation. And since money is basically time, you're creating more time for future you, which translates to more freedom in your work/life balance. So, at least from my perspective, instead of pouring time into getting that new 52 inch, 4K, 240 Hz, super flat-screen buzzword magic TV, it makes more sense to take those extra dollars and put them to work for me.

The thing is, at the end of the day, a flat-screen TV does nothing to make me a happier person. Neither does having a nicer car, or a shiny, carbon fiber road bicycle. And if it isn't making me happier, healthier, or just plain better as a person, it's not worth wasting my time/money on. Life is horrifically short in the scheme of things, and I'd rather build for my future and invest in experiences. ShinyNewThings eventually become DustyBasementFixtures, but experiences become fond memories. I guess that's my philosophy on spending money: invest in memories, not accessories.

*In my opinion, one Big Mac is approximately one too many Big Macs.