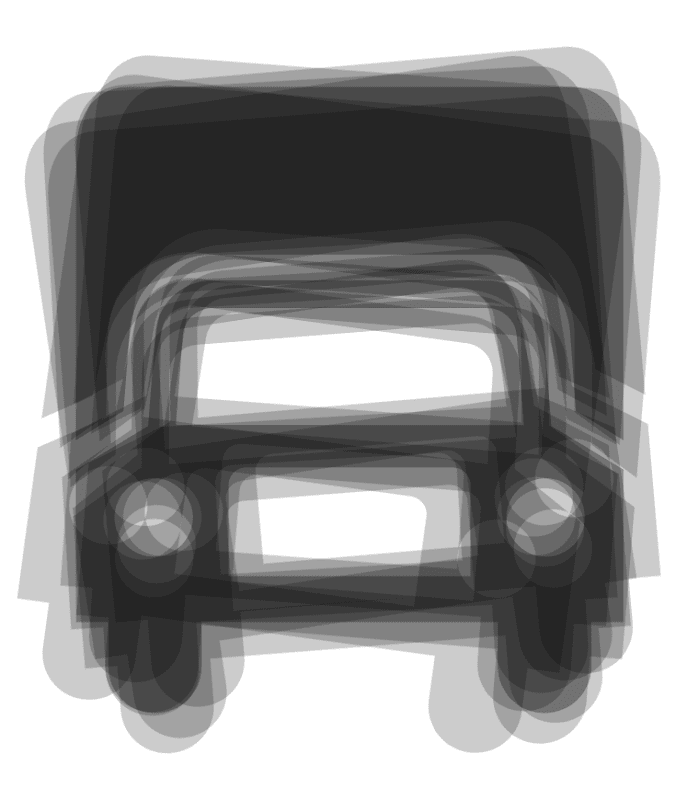 Source: I didn't realize it until after I finished goofing off in Photoshop, but if you think of the headlights as eyes and the grill being a mouth, this picture is especially fitting because the truck looks deeply, deeply unhappy at being jounced around.

Truckquake is the poor portmanteau (poortmanteau?) I'm going to use to describe earthquakes that I experience when I'm in the truck.

Earthquakes are a relatively common phenomenon in California. According to the California Department of Conservation, there are ~200 "potentially hazardous" faults in the state, and they generate an average of "two or three" quakes per year registering 5.5 or higher on the Richter scale, which is enough to cause "moderate [structural] damage". Fun, lighthearted stuff.

With earthquakes being common and all, earthquake stories similarly abound: A friend who awoke in the dead of night to their bed swaying; pets howling in confusion. A coworker who was driving when—suddenly—their car takes on a life of its own, veering this way and that, with the rest of traffic following suit. A neighbor who just swears there was a little one last night, even if nobody else felt it.

I'm now going to regale you with my own truckquake tale.

They always happen at night, because that's the only time I'm in the truck. I'm awakened by a sensation like someone shaking the truck back and forth. My first thought: "Is someone jumping on the tailgate?", which isn't as ridiculous a question as it should be, given that it's actually happened to me a few times. But we'll save those stories for another time.

Anyway, back to the sensation: it's akin to being in a car that a group of rabid frat bros are trying to flip over, conceivably because their sports team of choice has lost. Except it's much gentler—think small frat bros. Or maybe it's more like the sensation when another car passes yours at close range and your car kind of shudders in the wake, but on loop.

I'm realizing these descriptions don't sound nice, but the experience isn't altogether unpleasant. In fact, the quake normally rocks me back to sleep as quickly as it woke me, the whole experience being over within 45 seconds or so. One time, I vaguely remember thinking I was being abducted by aliens, which meant I had weirder than usual dreams for the rest of the night. But most of the time, I don't even recognize what happened until the next morning, when I have more of my faculties about me (or a co-worker mentions the quake).

Uhh…is any of that safe?

I've always been curious about how I'd fare during a truly terrible earthquake like, for example, the Big One. Specifically, am I better or worse off in the truck than an actual, honest-to-God building? I figured my biggest concern was the whole truck entering freefall as the ground disappears below it, but after doing the slightest bit of research*, Los Angeles Magazine set me straight:

…The earth opens up and swallows me whole? Luckily, these kinds of earthquakes only happen in cartoons and the Bible. What you’re probably thinking of is a sinkhole, which is caused by underground erosion, not by an earthquake.

So I guess I have nothing to worry about on that front.

More realistically, my main adversary would be trees falling on the truck. But, for no reason in particular, my bed is on the driver's side of the truck, which means it's closer to the road. That's awfully convenient, because if there are any nearby trees, they'd likely be on the passenger side. And hopefully, as they ripped viciously through the truck in a din of rending metal, some part of the frame would slow them down (and ideally stop them) before they reached my vulnerable, slumbering body, like a scene in a Final Destination movie.

All of the other "Driving in an Earthquake" resources I looked at just suggest pulling over and waiting it out. So if I'm fast asleep in the back, it seems like I'm already doing the best I can do. Plus, it seems like the suspension on the truck smooths out the ebbs and flows of the quake, so I should just sit back, relax, and enjoy the throe.

*I literally just Googled "earthquake in a car", which isn't even a good way to phrase what I was looking for.