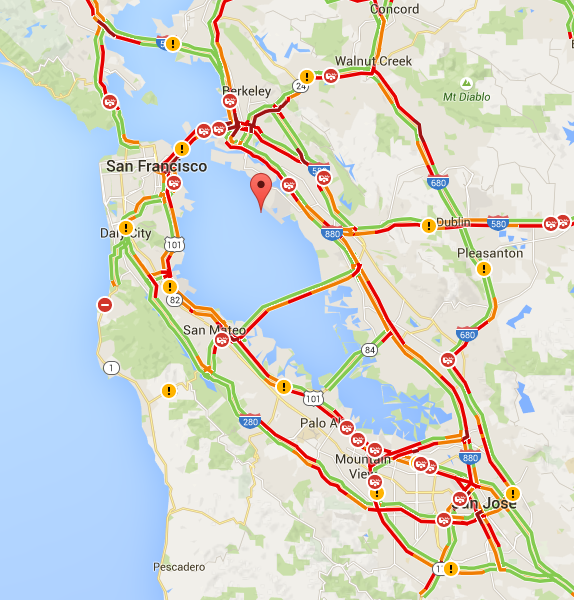 Traffic is a strange beast. Sometimes it comes from nowhere at all, wreaking unspeakable havoc on your itinerary, eviscerating your plans with startling efficiency. Other times it's entirely expected, and entirely unavoidable. In any case, nobody particular enjoys traffic (I certainly don't), it's an environmental tragedy, and it's ruthlessly wasteful. By all accounts, traffic is a Bad ThingTM.

Call it schadenfreude if you want, but on days when I'm not up at the crack of dawn, there's nothing I love more than rolling out of bed at my leisure, lazing my way to the gym, hopping on a treadmill and watching the brutal commute thousands and thousands of people are enduring. It's especially glorious because a large percentage of these people are, at a snail's pace, traveling to exactly where I already am. And it only took me 5 minutes to get here. My co-worker came in today exhausted because commuting from his house, a 15 minute stroll not during rush hours, took him a whopping hour and a half this morning, for no reason in particular. It's especially tragic because he still has a commute home to look forward to, which will undoubtedly be plagued by the same atrocities. I don't have the constitution or resolve to handle such a soul-crushing experience on a twice-daily basis, but power to everyone who does.

Living close to (read: at) work is certainly nice, especially under the lens of traffic, but don't get me wrong, it does indeed have its downsides, and I'd be lying if I said it was all sunshine and roses. For one, living at work makes it really easy to have a bad work/life balance, especially on weekends. If I'm not keeping busy enough, it's tempting to just go into work and get some stuff done, maybe do some laundry and hang out for a bit. I find that because I don't have a living room to hang out in, I have to keep reminding myself to get out and constantly have activities planned. All things considered though, I think the grueling commute is what burns a lot of people out, and the time and energy and resources I save by not having to endure that play a huge role in keeping me happy and productive as I work towards my larger goals.