Actually From Inside the Box 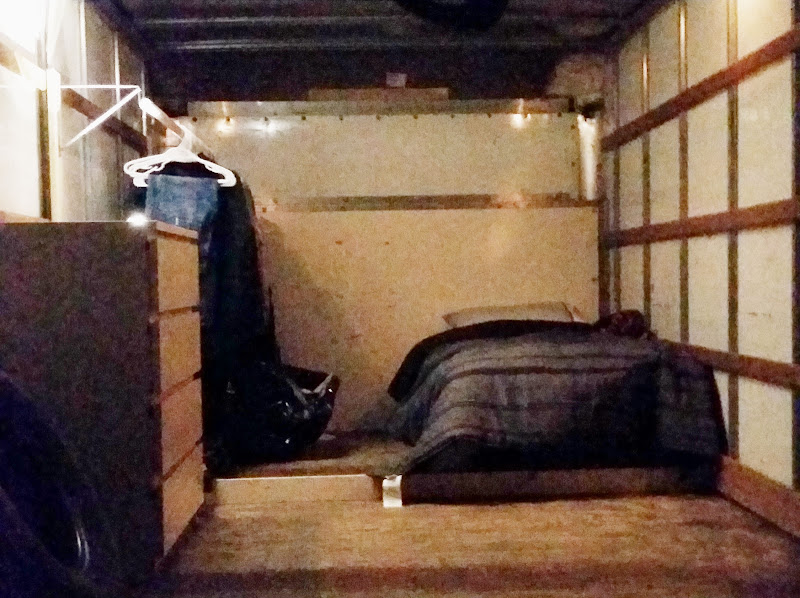 Ok, so I have a confession: this is the first post that I'm actually typing up FromInsideTheBox. By the magic and miracles of modern technology, I'm actually able to access the internet by tethering to my cellphone. I've already talked about how this place is starting to feel like home, but I think calling it a dorm room, as someone said to me today, is much more appropriate. It even looks like one (see the picture above for the current state of affairs). The only differences are that it's larger than any dorm room I've lived in, and I'm not sharing it with anyone, which are both pluses in my book (sorry Zach). And while I don't have any problems with it looking like a dorm room, I do have a few plans to make it a little more "homey" in the future.

The Box and Beyond

Most of these future plans revolve around a company I stumbled upon called Happy Vans in San Jose. They specialize in turning cars, trucks, and RVs into homes, and do all sorts of conversions. How perfect is that? I contacted them about some modifications, and they said they're backlogged by about two months, so it'll be a little while before anything actually happens, but here are some of the ideas I've had.

I also think it's important to note that I don't actually need any of these things. I did need a bed and a place to store my clothes, and if I'm really trying to live in line with my minimalist and utilitarian ideals, then carpeting, a sunlight, paneling, soundproofing, and power are excessive and a waste of resources. Most of the reasoning behind wanting those things is for aesthetic value, and if I really cared about that, why would I be living in a box truck to begin with? I've already accepted my self-induced (truck-induced?) celibacy, spiffing up the back of a truck doesn't exactly scream "romance". And if that's out the window, and these things don't provide any real, necessary benefit to my life or increase my happiness, why consume unnecessarily, and waste money I can put towards my goals?