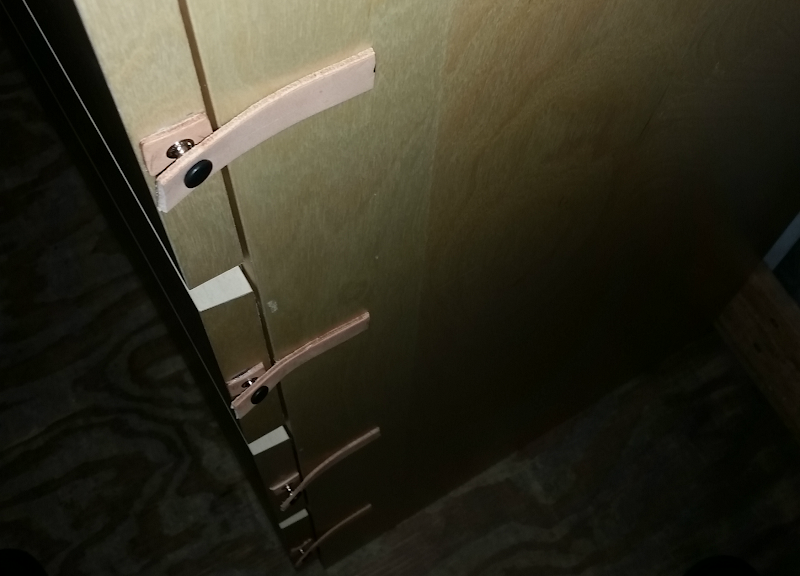 It's been a while (six months almost to the day) since I did my last big Home Improvement post, and I think it's about high time we changed that. Not only because a lack of Home Improvement posts signals stagnancy on the front of truck-progress, but also because there is much to be improved upon truck-wise, and I should be more proactive and motivated to work on it. This, as is likely evident from the title, is just a "Mini" Home Improvement project, but there are two fairly large ones that I've yet to write about, so expect those eventually.

In a shocking turn of events, a home improvement project didn't land me at Home Depot. Instead, I found myself ambling around the aisles of Michael's, a fairly ubiquitous craft chain store. I'd place Michael's pretty far down on the list of places I'd expect to find myself at, right there with "an apartment showcase", "grad school", and "a Homeowner's Association meeting". And yet there I was, shopping for leather wristbands and Super Glue like a pre-K camp counselor.

This strange shift in shopping proclivities came about as I attempted to solve a problem that has been plaguing me since before I moved in. I detailed it at the end of this post, but as a refresher, my problem was thus: I have a house on wheels that I drive sometimes, how do I properly secure dresser drawers so I'm not launching them (and pretty much everything I own) across the truck every time I take a turn too hard? My initial solution, Velcro, had failed spectacularly (and very audibly from the driver's compartment). As a stopgap solution so that I could, you know, drive, I wrapped the corners of the drawers in painter's tape, the only reasonable adhesive I had available. Naturally, this had a few problems of its own, like how it's annoying to un-peel and re-peel tape every time I want to grab a pair of socks, or how the heat during the day means that the tape loses adhesion pretty quickly and I have to reapply it, etc, etc. I got a few suggestions from readers on using childproof drawer locks and a few other ideas, but they didn't seem quite robust enough for my use case.

Eventually (read: two weeks ago), I had a bout of divine inspiration during which I realized that some combination of buttons and snaps would suit this situation well. The aforementioned trip to Michael's happened, and then I applied the following process to save my dresser drawers from my dubious driving abilities: 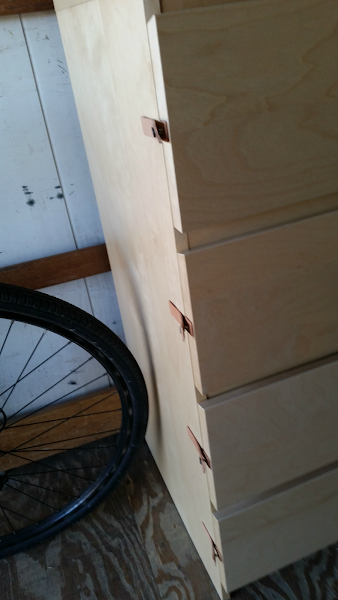 How well does it work?

It works really well…when I remember to snap them shut. On more than one (read: three) occasions, I totally forgot to snap them into place before driving off, which, as it turns out, makes them Totally Ineffective™. But when I do remember to use them, they work swimmingly. Super glue fares especially well when the force is parallel to the surface, I just have to be careful to not tear the leather straps off like a Band-Aid® when I unsnap them. Overall, it took about hour to do all the measuring/cutting/gluing, which isn't bad in the slightest, especially when it means driving around is less like throwing my belongings in a tumble dryer.