Tips from the Truck #5: Waste Management 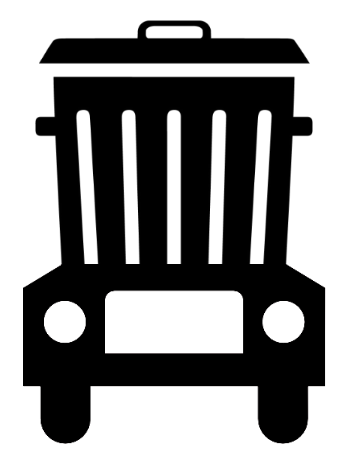 Source: An amalgamation of this trash icon from Ozark, Alabama and this truck icon from Clker

In a world where everything is prepackaged, replaceable, and easily disposable, trash is tragically an unavoidable by-product of living. Whether it's paper towels, tissues, plastic packaging, cleaning products, cardboard containers, clothing tags, receipts, pretty much every transaction you make is going to generate some type of waste. And waste is, like, generally bad, right? It takes up space, serves no real purpose, wastes resources and energy, and most importantly for truck folk, there's really no good place to put it.

If you live in a house, you probably put your trash on the curb once a week and the trash fairy comes and takes it away. You either pay the town or a contractor to send this fairy to your house. If you live in an apartment building or complex, chances are there's a communal trash heap/chute that you dump your undesirables into. As far as I'm aware, there's no truck-to-truck trash removal service, and quite frankly it would be pretty weird if there was. My strategy for managing waste was non-existent up until recently, and that was definitively a Bad ThingTM.

You're going to have to deal with some amount of trash, it's inevitable. However, the raw magnitude of refuse you generate will vary dramatically with how proactive you are in controlling it. Here are some of the things that help me minimize what I'm throwing away:

Like I said, it all started with a trip to Ikea. I had successfully (and painfully) assembled the dresser, and I was left with a huge mass of cardboard and plastic wrap and all the other various fixings of the packaging. I did what seemed like the reasonable thing to do at the time: I took all of the trash, threw it in a big bag, and dumped the bag in a corner of the truck. This would have been fine and all, except that the bag was still there three months later. And every time I cleaned anything, or bought anything, or did pretty much anything other than sleep, there would always be some new piece of trash. Naturally, I threw it into that ever-growing black hole of bad decisions and didn't think any more of it.

It probably doesn't sound all that bad, it just sounds like a trash bag. Except that at this point in the story, it's filled with who knows how many random house-cleaning chemicals, discarded shampoo bottles, and random other waste that I've accumulated by being alive. Not only was I sleeping within a few feet of this near-definite biohazard, but if I've learned anything, it's that bugs will eat pretty much anything. And I had a whole lot of anything and everything in that bag. I wouldn't be entirely shocked if that's what was attracting all of my bug buddies.

And I'd still have that same mystery bag in my truck, had a friend not needed some help moving. Luckily they did though, unintentionally giving me the perfect opportunity to quietly rid myself of 20-ish pounds of God knows what into a dumpster in their apartment complex. But clearly that's not a sustainable solution; I'm not going to be consistently helping friends move. That said, I'm sure my friends enjoy knowing someone in possession of a moving truck. But still, if I can't rely on throwing trash in friends' dumpsters, what are my options?

This is a pretty obvious option. You have trash, you need to get rid of it, you take it to the landfill. Simple and easy. The first problem is that most landfills don't like to take random trash. They'd prefer if you sorted it, placed it in separate bags, and other completely reasonable requests that I had no interest in complying with. Not a huge deal, I'm sure I could travel 50 or so miles and find one that would take my wad of trash in all of its unadulterated glory. In the grand scheme of things, a 50 mile drive actually isn't all that bad. It's inefficient for sure, and I'm not big on rampant inefficiency, but that's manageable since I would only be doing it every few months. But once I get there, I still have to pay for it, and on top of that, I'm dumping it straight from the box to their facilities, meaning some garbage guys and gals are going to be all up in my house. Like I've said before, I don't mind people seeing my situation, but I'd prefer not baring all to some complete strangers. Finally, I still have the aforementioned problem of building up trash for weeks or months at a time, an all-you-can-eat buffet for pests. Certainly not ideal.

Definitely not. Aside from being straight up illegal to dump your trash in unauthorized dumpsters, it's also just incredibly rude and not my thing. I'm not trying to be the homeless guy creeping around foreign apartment complexes looking for a place to dump my trash under the cover of night. That's beyond weird. I'm also not going to ask my friends if I can dump my discards in their trash, because that's just as strange. In the same vein, it's also not their responsibility in the slightest. I'm the one who signed up to live in a truck, they shouldn't be responsible for any of the side effects or consequences.

The more I thought about it, the more I realized the main issue was one of quantity. It's easy to throw away a piece of trash, you just toss it in one of the million receptacles blending into the background of your day-to-day activities. If you let it accumulate though, it quickly becomes a cumbersome blob, an entity all its own. So the solution I went with was a simple one: buy some small, biodegradable trash bags, and every time you generate trash, throw it in one of those bags, then toss it out the next time you're out and about. Tossing a small bag into a public trash can isn't a burden to anyone, and it saves me from building a trash stockpile in the same place I sleep. Combine this with the above practices for minimizing trash in the first place, and you have a reasonable, low-cost, sustainable system. I've found that I only really generate trash one or two nights a week now that I'm all settled in, and it's usually just a tissue or old cloth while cleaning or exterminating the occasional bug who wanders into my crosshairs.

So that's that. Take a little bit of planning, add some small bags, develop a process that takes up no more than 2 minutes and you have a solid recipe for keeping your truck home free of trash.