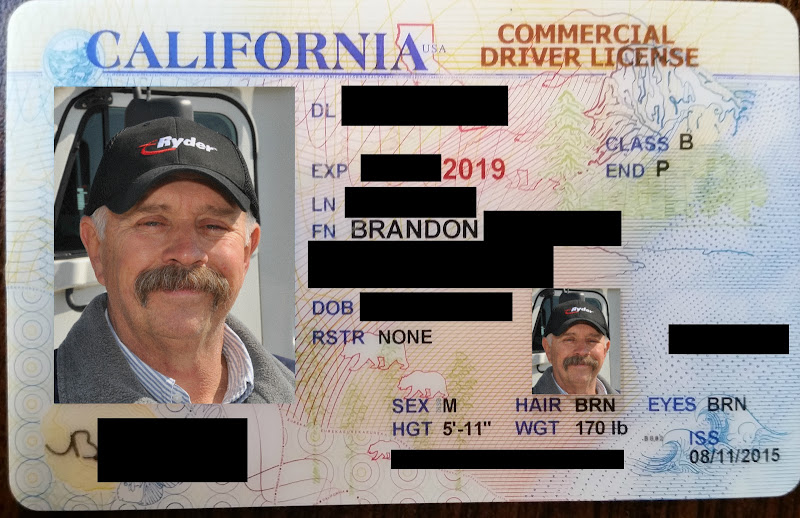 Source: My shiny new Class B license, with a few redactions/modifications

...or at least drive Class B vehicles. Also, as it turns out, licenses have a lot of personal information on them, and I've done my darnedest to remove any fun details, like where I "live".

Anyways, I've finally done it. For those who don't understand why this is exciting for me, let me give you a bit of background.

I drove buses in college. It was the highest-paying job on campus, which is what initially drew me towards it. But it was the flexibility, fun coworkers, and quick promotion to programmer that kept me there. The deal was that they'd pay you while training you to get your CDL license, and in return you'd drive for them for a few semesters at the very least, which as I mentioned in this post, is a pretty sweet deal. So I did my shtick driving buses and writing code for them for four years while I pursued higher education. Overall it was a good time, I definitely recommend it.

So I graduated and decided to try out this coast out for a while. One of the first things I did (after buying the box truck, of course) was make my way down to the DMV and get a license like a real-life California resident. I would have been fine with a normal, Class C license. After all, my career out here is software engineering, not bus driving. But a consequence of getting a normal license, because of various laws and whatnot, was that the DMV would have to shred and invalidate my out-of-state Class B license. This, I was not fine with. I felt that I had worked hard and earned the right to drive stupidly large vehicles, why should moving across the country deprive me of that? So I started looking into the process to transfer my CDL license to a California CDL license.

After a bit of inquiry, I found out that the process would be approximately two steps. The first: pass a series of tests on how to not crash large, occasionally fast-moving vehicles. The second: prove to a certified doctor that you probably won't fall asleep/die/seize/go blind/spontaneously combust while piloting aforementioned vehicles. Easy peasy. I aced the tests on my second try. I found a local person who claimed to be a doctor and allowed them to examine me. They seemed confident I was fit to commandeer 13+ ton pieces of machinery, and if they're cool with it, I'm cool with it.

With all of my completed paperwork in hand, I drudged my way back to the DMV and patiently waited in line for the better part of eternity. Once it was my turn, I approached the pearly gates and handed them my papers, and they spoke thusly:

Sorry, there's been a computer error, you'll have to come back next week.

-DMV Employee/Keeper of the Pearly Gates

This was devastating to me for a few reasons. Firstly, this process had really been dragging on, it had been almost three months since my first DMV visit (with four more in the middle), and I was really hoping this would be the last one. The second, and most nerve-racking reason, was that I didn't know what was causing the computer error. What made my application different than all of the others? Was it because I didn't have a real address? Was the DMV about to accidentally stumble onto the fact that I'm secretly homeless and the home address I've provided them with is nothing more than a storefront. After all, it doesn't take more than a Google search of the address to see that it's a glorified post office box, could they have a system that does the same thing? This was moderately stressful, I was sure that I was all set and then this roadblock popped up. A soul-crushing experience all-around.

So I made another trip to the DMV a few days later. If you're a fan of the sound of small children crying, or particularly enjoy the scents of bad hygiene and hyperhidrosis, then you would have had a blast at this DMV outing. I, like most people, am not a fan of those things, and thus I did not enjoy this DMV trip. In any case, I went back up, explained my story, and they called some people who hopefully had a better grasp on the situation. After a few more eternities, they asked for my old license, and in return handed me a small piece of paper with the title "TEMPORARY LICENSE".

This was a start, but I was still on edge, and wouldn't be entirely comfortable until I had the full-blown, big boy license, which they said should arrive in the mail in the next 60 days. In my haste and anxiousness, I didn't realize the implications of handing in my only photo ID. What this meant was that the ensuing few weeks were to be devoid of any bar-visits on my behalf, tragic I know. But as is evident from the picture above, it did eventually arrive in the mail, adding legitimacy to both my truck ownership, and my sketchy private mail box address. If there's any takeaway from this story, it's that the DMV can be a fickle mistress, but things normally work themselves out in the end.

A terrible takeaway I know, but unfortunately my hours of pondering life's unanswered questions while waiting at the DMV didn't yield any earth-shattering revelations.