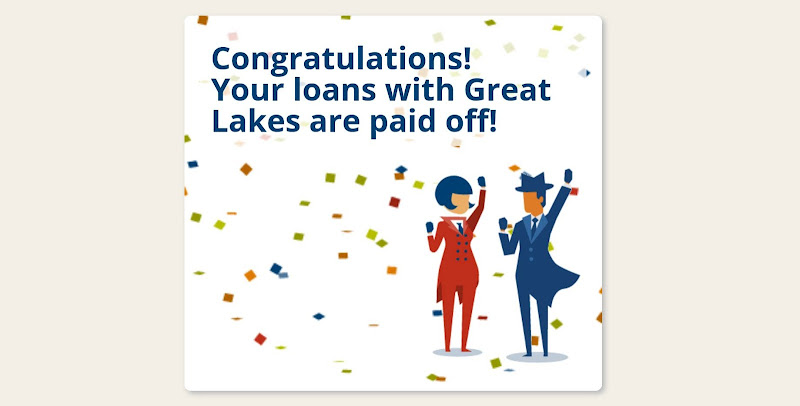 Source: Great Lakes, my loan servicer. Paying off your student loans is apparently such a big deal these days that they literally fill the page with confetti when you manage it.

Student loan debt is, uh…a problem in the good ole US of A, to say the least. It has passed credit cards for the number two spot on the list of "biggest things holding American wallets hostage," behind only mortgages at this point. When millennials wake up in a cold sweat in the dead of night, filled with a deep, overwhelming, and existential sense of dread, it's probably because student loans are haunting their dreams. Okay, hopefully it's not that bad, but it's no wonder student loans get a bad rap, with millions of The Indebted™ buckling in for the long haul, getting ready to work and whittle at the loans for the next decade (or more).*

Looking back through my posts, it's clear I've been pretty active in trying to take my own personal student loan blackhole down a notch (or twenty thousand). Hell, it was one of my inspirations for trying to live more simply; I figured that the sooner I got this cap-and-gown-wearing monkey off my back, the sooner I'd have the financial flexibility to branch out and explore. 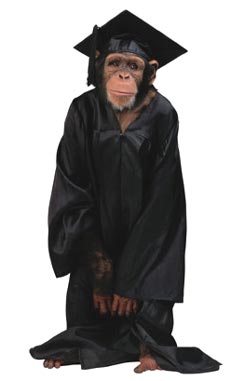 Personally, I think a cap-and-gown-wearing monkey is a great metaphor for student loan debt. It's also just adorable.

Indefinitely borrowed from this blog.


I'm happy to say that, as of June 7th, I've officially paid my student loans in full. What follows is my account of everything that made it possible.

I didn't grow up particularly wealthy. I didn't grow up particularly poor either. "Decidedly Middle Class" is what I'd call it, if you asked me. I'm fortunate enough to have two parents who love me dearly, even if they gave up on each other a long time ago. I never had a college fund, just some Bar Mitzvah money that disappeared with my parents' marriage and my childhood home. Never figured out what happened to the money, but I got this really great shirt when my Dad came back from Las Vegas.**

Anyway, when it came time to apply to colleges, my guidance councilors basically told me the sky was the limit. Accepting their advice with a little too much fresh-faced optimism, I applied to Caltech, Carnegie Mellon, Frank W. Olin, Harvey Mudd, MIT, Stanford, and Yale, in particular order. Oh, and I applied to UMass Amherst too, almost as an afterthought. They didn't require an extra essay and they waived the application fee, so I figured why not?

I got denied from every single school

I wasn't outright denied from all those schools. Some of them waitlisted me first, and then promptly denied me once a more-qualified applicant accepted. I'd argue that this was actually worse. In retrospect, I was definitely a bit too idealistic. Sure, I had good grades, but I wasn't exactly a seven-sport athlete who had cured cancer by the age of four, which feels like the bare minimum these days in the increasingly ridiculous rat race of college admissions. It probably didn't help that my high school is ranked 226th in the state of Massachusetts (at least according to some random website I found). Anyway, the whole experience was wholly ego-crippling for 18-year old Brandon, who didn't realize the blessing in disguise that had been handed to him.

Here's the quite literal deal: UMass Amherst is a state school, and a good state school at that. It's also a Massachusetts state school. And 18-year old Brandon was a Massachusetts resident. This means he could go to school there for over $16,000 less each year than his out-of-state counterparts. This is a nice discount on a school that was already only half the price of the next priciest school he applied to. Further, Brandon's state test scores from like, middle school, qualified him for a state scholarship that covered all tuition for four years.

Wait what, free tuition for your whole college career? That sounds way too good to be true. Also, stop talking in third-person.

It's totally way too good to be true. Tuition is free, but state schools redefine tuition to be a small chunk of the cost of attendance. Still, an $857 discount per semester is icing on the already heavily-discounted cake. And so we're off to a good start.

My FAFSA made it clear I'd still be paying a few grand out of pocket each semester (because I was Decidedly Middle Class™ and all). So I applied for the highest-paying job on campus I could find: driving buses. I got the job and started training a few weeks into my college career. I set up a payment plan with the school every semester. I checked the loans I was taking every year and declined them when I thought I could pay the difference, especially when they were unsubsidized. I applied for every scholarship that seemed vaguely relevant. I eventually started developing software systems for the bus company and learned how to build pretty legit web apps. I took that knowledge and used it to do some independent contract-work. I graded Computer Science classes on the side. I paid down the compounding student loan interest whenever I had some extra money. 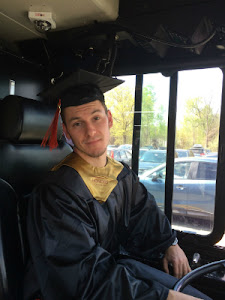 Driving a bus for perhaps the last time, to my own graduation. As is tradition.

The party is over. It's June 2015 and I've graduated college. I shook some hands, hopped off the stage, threw my cap-and-gown aside, and hopped on a plane. At this point, I've already purchased and moved into The Box and settled into a nice routine. It's time to face the facts and figure out my finances. My loans have a six-month grace period before I have to start paying them, but since they've been compounding interest the entire time (including some of the subsidized ones as I found out, much to my chagrin), I figure I'll get started right away. Step one is figuring out how much I owe, and who I owe it to. You'd think this would be the simple part, but with all the emails and exit interviews and papers to sign and forms to fill out, it's easy to lose track. I didn't have any private/third-party loans, but I can only imagine it being that much more confusing.

After all was said and done, I graduated college with $21,927.50 of debt. A large chunk of change to be sure, but that's not even half a year's tuition at a lot of brand-name schools, so I consider myself fortunate in that regard. I had already paid an additional $27,915.50 out of pocket during my four years, and another $772.29 went to interest. In total, my college education cost me $50,615.29. 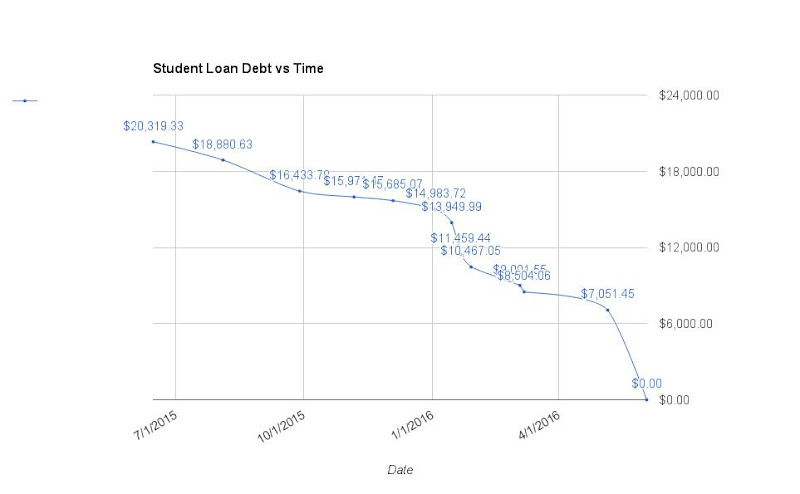 My loan balances with respect to time. The large dips generally correspond to stock grants and bonuses.

Once I started working, paying the loans down became a game. Since my monthly expenses were (and still are, for that matter) virtually nil, what wasn't going into tax-advantaged accounts was split between my investment portfolio (75% VTI, 25% VXUS) and loans, in a ratio that changed depending on my mood and desire to see the debt graph (pictured above) head south. I funneled bonuses and stock grants to the cause, which correspond to the larger dips on the chart.

I'm incredibly fortunate in that I was able to pay off my debts in a relatively short period of time. Ironically, the largest factor that enabled me to do so was basically out of my control. At 18 years old, I would have chosen any other college on my list, had any of them accepted me. Given that they'd all have been at least twice the price, it follows that it'd have taken me twice as long (or longer). Worse still, I can't see how it would have been any better for me in the long run. It's easy for me to say this now, but I believe that you'll get out of school whatever you're willing to put into it, regardless of the brand name (and accompanying price tag).

After that initial decision of where to go, it really just comes down to looking your debt in the face and knowing everything about it. Who are the loans with? What interest rates do they have? Do they accumulate interest while you're in school? When do their grace periods end? How much will the monthly payment be? Which payment plan options do they offer? How much can you afford to pay? Are there any debt forgiveness programs for your profession? The more you know about the enemy, the more manageable they are.

As a parting note, though this post isn't all that timely given that I paid off my loans almost two months ago, it is timely because my more-symbolic-than-actually-to-be-taken-seriously savings clock has nearly reached the total volume of student debt I started with. So my (very approximate) rent savings alone nearly paid for my education. There's probably some more meaningful, deeply symbolic message to be extracted from that, but I'll leave that as an exercise to the reader.

*More info about the state of student loan debt in the US can be found here.

**I'm not bitter though. If I had had a college fund and hadn't had to work through college, I wouldn't have landed the jobs that gave me the experience that prepared me for my current (dream) job. There's always an upside.