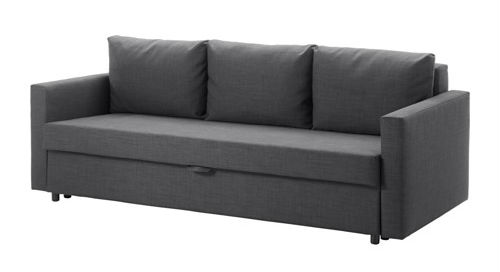 Source: I never actually saw the couch, so I don't know what it looks like, but this is from the one and only Ikea

Every once in a while, life will challenge you with a question. Not only does this question require an answer, but regardless of the choice you make, you know that it will have a profound impact on your life. Thankfully, it is infrequently that we are burdened with such decisions, but we must still be vigilant so that we may ponder and puzzle and appropriately pick a plan when the need arises. Recently, one of these decisions was thrust upon my shoulders, and it came to me in the following form:

Hey Brandon, would you like a couch? A friend of mine has a new one they don't need anymore.

Ok, maybe I was being a bit dramatic initially, but I've learned that living in a truck changes where your priorities lie. For example, if I lived in an apartment, chances are I would have simply said yes. A free, new piece of furniture for my (likely) sparingly furnished (imaginary) apartment would be a nice addition. It's especially hard to argue with the free part. However, I don't live in an apartment, so there were some considerations to be had. So, as I am one to do in the face of adversity, I made a list of pros and cons.

I'd been considering getting a couch even before one was offered to me on a silver platter. These are the reasons why I was even thinking about it in the first place.

Sounds pretty good, right? What sort of drawbacks could there possibly be? As it turns out, putting the couch in a truck changes the equation a little bit.

With the sudden realization that owning the couch costs me like $5 every 1,000 miles, I'm almost regretting not getting it, because that was my biggest concern. Oh well, you live and you learn.