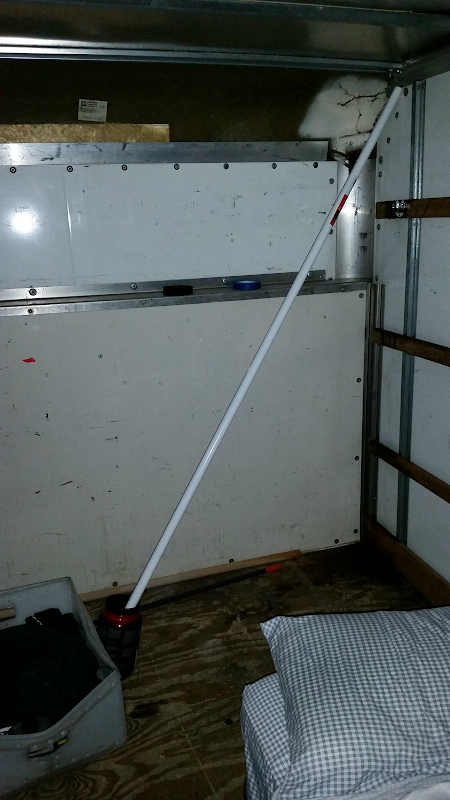 Source: MacGyver-ing my way to dryness, and taking pictures in portrait because I don't know how to camera

Note: Throughout this post, I use phrases like "yesterday" and "last night". In reality, it was two nights ago, but I'm slow to get my thoughts onto (digital) paper.

The Bay Area is a fairly dry place. In the past six months of my living out here, it has only "rained" a handful of times. I use the term rain lightly, because it's barely ever more than a passing drizzle. In spite of the precipitation's timidity, people have become so adjusted to the area's micro-climate that they act (and drive) like it's a flash flood. Yesterday, it rained. But it didn't "rain", no, this wasn't Your Dad's Rain™ at all. Yesterday, I experienced my first Californian downpour.

Falling asleep to the sounds of a light drizzle has actually proved fairly relaxing. The measured, metallic taps of gentle raindrops on the thin box roof haven't been cause for much concern. Unfortunately, that doesn't hold true when showers become full-on rainstorms, a la last night. The metallic taps turn into a two-year old's one-man pot-and-pan all-percussion band, a perfect maelstrom of discordant tones. It was more than enough to wake me up a few times over the course of the night: groggy, confused, and wondering if my life was in danger at the hands of the monsters pounding on my walls.

I've mentioned "The Hole" before, a looming Home Improvement project I've been trying (lackadaisically) to figure out how to address. It hasn't really been an issue, the pecking crows I get every so often aren't a big deal, and the few sporadic spurts of rainfall I've seen so far never let more than a few drops of water inside. Last night, my relationship with rain took a turn for the worse. Dwarfed by the din of rain using my roof as a bongo drum, I could faintly hear a metered drip sound, maybe once every few seconds. This is a Bad Thing™: a drip every few minutes I can ignore, but at this frequency, I'm dealing with a pretty substantial amount of water. Too much water potentially means mold or mildew, or rotting away the wood, or making the truck extra humid during the day, which in turn makes it a breeding ground for sadness (read: bugs). So I begrudgingly rolled out of bed (at 3:26 AM) and took a look at the situation. Sure enough, the area around the hole was providing a slow, but steady stream of water droplets, and aggressively placing them on my floor. Time to spring into action.

I'm no stranger to leaky roofs; my childhood home had its fair share of drip spots. The living room and my bedroom were particularly bad offenders, but we'd just grab a few pots from the kitchen, gingerly place them on the carpet, and not think much more of it. As it turns out, I don't have any pots in the truck. I did however, have an empty tub of protein powder that I hadn't had a chance to throw away yet. But alas, the drip was in the corner of the truck, and water was splashing all over the wooden railings before it hit the ground. I first attempted to tape the tub to the wall/ceiling, but all I had was carpenter's tape and the angle was all wrong anyway. I needed a way to divert the water away from the wall, and funnel it down into the tub.

Then I remembered about the new clothes rack I've yet to finish. The hollow metal rod is ever so slightly longer than the width of the truck, and I've been taking my sweet time cutting it with a hack saw (which takes forever). As a result, it's been sitting on the ground for approximately two months, clanging obnoxiously to remind me of its presence anytime I drive anywhere. Anyway, I maneuvered one end of the rod up to the leak, jammed the other end into the tub, and then used a bin full of random stuff to hold it in place. The end result is pictured above, and I like to think that MacGyver would be proud.

It was still raining when I woke up again at 5:30 AM, and the makeshift bucket had actually collected a fairly impressive amount of water. Was the stopgap a success? I like to think so.

Even though it doesn't rain here much, fixing the leak is a much more attractive option than just managing the leak. Theoretically, I could just rig up the pipe/tub combination every time it started raining, but that's more of a cop-out than anything else. What happens if I'm away for a few days and it rains? I can't keep the pipe there all the time, it's not stable enough to stay in place while I'm driving. Plus, do I really want to keep an empty tub around all the time? That's just clutter, and I'm not one for clutter.

The issue is that the damaged area isn't just one material. The outside looks like sheet metal, and the inside is some sort of fiberglass composite. I could just throw some epoxy putty over the wound, but I have my doubts about how well that would hold/keep out water. I'll have to call a few different places (mechanics, glass companies, Ford-certified maintenance centers, etc) and see if anyone can fix the whole thing at once. And if it takes them more than a day to do it, I have to find a place to stay. Not a big deal, but the combination of all the aforementioned obstacles probably explains why, after six months of owning the truck, the damned hole is still there.