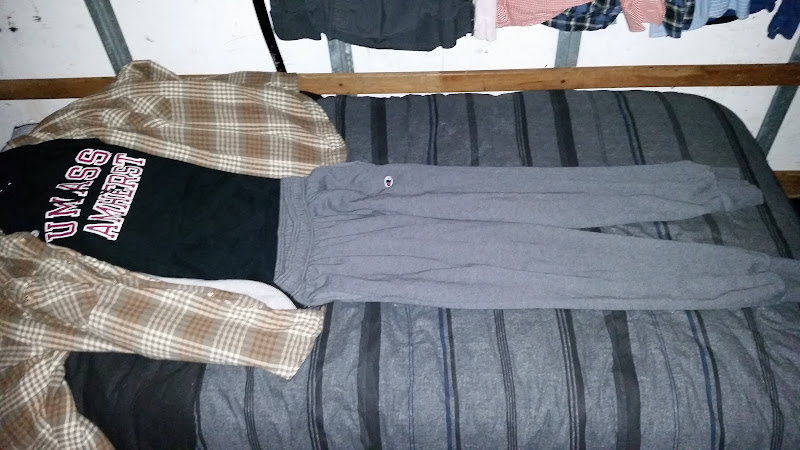 Source: My arsenal for climate control. Yet again, I've taken a picture that looks like it was ripped from Crack House Monthly Magazine.

Note: I've never seen Game of Thrones, but I'm pretty sure the title is a reference to it.

When I was a kid, I used to watch my dad plow driveways and parking lots. He'd be out in the middle of a blizzard, wearing a sweatshirt (at most), carving out huge scoops of snow and heaving them over his shoulder. In moments like those, I thought he was a true-to-life superhero. So naturally it's no shock that I inherited his lust for needless feats of masculinity and macho-ness. As fall turned to winter every year, I'd resist transitioning to a more climate-conscious wardrobe, clinging on to my T-shirts and basketball shorts until it was painful. I chose to "brave" some of the coldest, snowiest winters in Boston history wearing only a UMass hoodie and some well-worn jeans. And even when I wasn't being unnecessarily obstinate, I still spent four years with a roommate who loved keeping the windows open on frosty nights, and that's basically like sleeping outside, right? I'm well-aware that these weren't the smartest decisions, but there is an upshot: I was, without realizing it, conditioning myself for my current situation.

As we creep closer and closer to winter, I've been noticing my reluctance to leave the warm embrace of my bed for the frigid world beyond.* Luckily, this is more my own hypochondria than actual hypothermia. After all, how bad can it really be when the record low for the area barely breaks freezing? Remembering the bitter -17° F morning I experienced last semester in Amherst, where I could literally feel my nose hairs stick together with each breath, the current climate is a comparative cakewalk. That said, there is still a big difference between it being 45° outside versus 45° in your home, where you sleep. So what am I to do about it?

The name of the game is heat control. When you step back and take a good look at the situation, a couple simple facts are pretty clear:

Brandon, are you high? Don't get all existential/Astral projection-eqsue on me, what's with that last bullet point?

Don't worry, we're getting there. Now that we've established our few basic truths, we can come to a nice logical conclusion. Since the truck is so poorly-insulated, attempts to keep it warm are going to be futile and wasteful. So really, what I have to do is make sure that the sweet, sweet heat I'm producing doesn't go far. And that's exactly what I've been doing. I picked up a bulky, patchy jacket from Goodwill, a pair of cozy sweatpants, and an extra blanket (all pictured above). That way, as my body works off the extra plate of fish tacos I opted for, I'm taking that heat and making a comfortable little cocoon out of it. I can't help but be reminded of a piece of my father's advice, uttered while expressing his relationship with the cold:

You can always put more layers on, you can only take so many off.

It's been cold enough at night for a few weeks now to warrant putting this plan into action. Each night, after I've finished unpacking and repacking my gym bag, I throw on tomorrow's workout rags, then toss on the sweatpants and sweatshirt, and top it off with a jacket. I also throw on socks for good measure, which I've found make a pretty big difference in my eagerness to get out of bed in the morning. I then waddle into my bed like the Eskimo that I am, pull the respective sweatshirt and jacket hoods up, and proceed to sleep like a small child for the ensuing 7-9 hours. As for the effectiveness, I've noticed it doesn't take a ton of mental self-coaxing to get myself out of bed anymore, even when the temperature dips below 40. In fact, I'm sleeping better than ever, though I still need a little more data before I'm ready to do a full-scale analysis.

Isn't That Bad For You?

During my fifteen minutes of fame, I received many a comment letting me know that exposure to the cold causes any and all of the following ailments: pneumonia, herpes, polio, fetal alcohol syndrome, irritable bowels, death, being placed on Santa's naughty list, etc. Though these claims were dubious at best, I certainly was curious as to what I'm doing to my body. Thusly, I did some research. And when I say "research", I really mean "Googling a phrase aligning with my preconceptions, then reading the most reputable link". As far as my "research" shows, cold weather being the cause of sickness is a total myth. From the linked article:

Cold weather also does not cause colds -- at least not directly. Despite its name, the common cold is not caused by cold. "It doesn't have any effect at all," says Tallman. "There's no correlation." In fact, you may be more likely to "catch your death of cold" indoors, where it's warm and crowded than outdoors in the chilly air.

They go on to explain that cold air causes people to be in closer quarters, which in turn causes less-restricted spreading of illnesses. As long as I'm sleeping alone in the truck, which is usually the case, the cold air doesn't appear to be any worse for me. In fact, sleeping in cold weather can increase your brown fat stores while you sleep, which actually burn calories in colder temperatures. So not only does living in a truck-shaped freezer not hurt my health, it actually boosts my metabolism and makes me even warmer over time. Plus, a combination of reasonable genetics, proper diet, and exercise has graced me with a formidable immune system that drops its guard less than once a year. All things considered, I think I'm in good shape for the winter. The worst case scenario I can see is that it's colder than I'm expecting. If that's the case, I'll follow dear old Dad's advice and get some more jackets, or maybe even spring for a sleeping bag. Bring it on.

*As a rough estimate, I spend about 3 minutes longer in bed for every degree (Fahrenheit) below 50°.

**And I have no intention of insulating it, though weatherproofing is a different story.