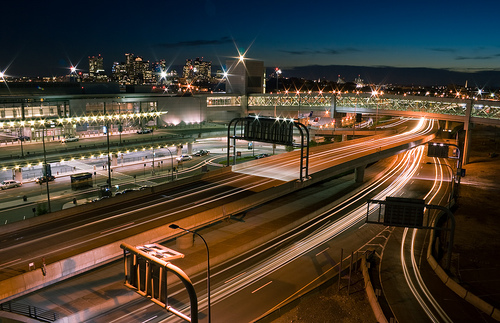 It's midnight and my flight has just landed in Boston, two hours behind schedule. I step out into a crisp September night; the air never tastes like this in California. It's refreshing, but despite it only being 9 PM on the coast that I left from, I'm exhausted. It's been a tiring few days of tying up loose ends before the trip, and staring at a dim screen on a dark plane wasn't exactly conducive to sustaining my consciousness. After counting out 27 complete revolutions of the baggage return carousel, I find my suitcase. I try my best to muster a smile at the rental car kiosk, but the attendant's reaction makes it clear I didn't exactly sell it. The car keys dangling from my index finger, I heave my bag onto the backseat. All that stands between me and sleep is a 100 mile drive down a deserted highway. I sync the car to my phone over Bluetooth, and throw on a playlist. I opt for a "noise rap" playlist, that should keep me awake. A few tolls and I'm on the Pike.

It's 1:30 AM at this point, I hop in the left lane and punch it. Looking outside into the darkness, the only indication that I'm even moving is the steady vibration of the engine and the cracks in the road that whip past my headlights. If I keep a steady speed, I'll probably make it back b—blue lights go on behind me. Ugh. This isn't my first rodeo, though, I've got this down. Blinker on. Lane shift. Blinker on. Lane shift. Blinker on. Lane shift. Car in park. Hazards on. Roll down window. Shut off car. Keys on dash. Hands at 10 and 2. Sit there and wait. I'm pretty sure I was going 85 mph, so I'll just admit my mistake, apologize, and hopefully be on my way. The speed limit is 65, and the fine is $10 per mile over the speed limit, so I'm looking at a $200 fine. Not the best, but not the worst, and it is entirely my fault after all. With any luck he'll let me off with a warning.

He retires to his car to decide my fate. Twenty minutes go by, I realize it's highly unlikely he's writing me a love letter in there. My corneas are searing, they aren't enjoying the sunbath from his face-melting-ly bright spotlight. The light swerves briefly as he opens and closes the cruiser door.

"Have a nice night."

The ticket was for a cool $470 (ouch). My theory is that he saw I had an out-of-state (California) license and really laid on the fines, knowing I'd be unlikely to appeal it. The more likely scenario is that I'm just being bitter: blaming others is easier than admitting character faults. The final charges were as follows:

Brandon, this just seems like a normal speeding ticket, and you totally deserved it. How is any of this truck-related?

We're getting there, but for now just know that I paid the ticket and didn't think much more of it.

It's a Friday like any other and I'm heading to my private mailbox to pick up my mail. I've got a few credit card promotions, which I immediately toss. More interesting, I've got two letters from the DMV. I open one, and it reads as follows:

DUE TO THE LATEST ENTRIES TO YOUR DRIVER RECORD (SEE BELOW), YOU ARE NOW AMONG CALIFORNIA'S WORST DRIVERS, ONE OF THOSE WHO CAUSE THE MOST CRASHES, INJURIES, AND DEATHS.

ONE MORE POINT ADDED TO YOUR ALREADY POOR DRIVING RECORD AND YOU WILL MEET THE LEGAL DEFINITION OF A NEGLIGENT-OPERATOR. IF THAT HAPPENS, YOUR DRIVING PRIVILEGE WILL BE IN JEOPARDY.

Jeez, that doesn't sound good. What is all of this about though? Other than that speeding ticket in Boston, I hadn't gotten a ticket in over three years. I look at my attached driving record, which contains the following very helpful table:

Oh god, I see what's going on here. They're counting each offense as a separate citation against me, this isn't promising. Heart racing, I open the second DMV letter:

YOUR DRIVING PRIVILEGE IS SUSPENDED AS OF NOV 18, 2015 AS A CONDITION OF PROBATION AND CANNOT BE REINSTATED BEFORE MAY 17, 2016

I'm not normally one for panicking, but I'm definitely struggling to keep calm at this point. This letter clearly states that I'm losing my license for 6 months. Plain and simple. In between bouts of freaking out, I pull myself together for just long enough to muse on the wording of the letters. California's worst drivers? Poor driving record? Most crashes, injuries, and deaths? Calm down DMV, I was the only car on a five lane highway at two in the morning, it's not like I drove clean through a shopping mall on Black Friday.

This wasn't a contingency I was prepared for. It had never even crossed my mind. I can live without having a car for transportation, that's not a big deal. But what am I supposed to do, just find a spot where I can leave it for six months? And did the cop who wrote my ticket know he was taking away my license by piling on those charges? The letters made it incredibly clear what the consequences of driving without a license were:

IF YOU DRIVE WITHOUT A VALID LICENSE, YOU CAN BE ARRESTED. YOUR CAR CAN BE IMPOUNDED AND SOLD.

So not only can I be arrested, but my car can literally be sold at auction? That kind of raises the stakes, you know, because I live in my car. Driving without a license could literally make me homeless, and not in the fun, cushy, voluntary way that I'm currently homeless.

At the bottom of the letter, it says I can schedule a hearing, which I resolve to do first thing Monday morning.

Five minutes before my scheduled phone hearing (I didn't even know that was a thing), I get a call from who I presume to be the DMV:

Hi, is this Brandon? We took a look at your case and are calling to tell you we cancelled the hearing, your license is not being suspended. We'll send you a letter confirming this. Have a great day!

Well then, that was anticlimactic. I don't know whether it was a computer glitch or just miscommunication between the states involved, but it's over. I would much preferred if it had not happened in the first place, because I spent the whole weekend having a perpetual stress-induced aneurysm, but that's just life I guess. Luckily, I don't have to worry about any speeding tickets in the near future…the truck doesn't even go that fast.